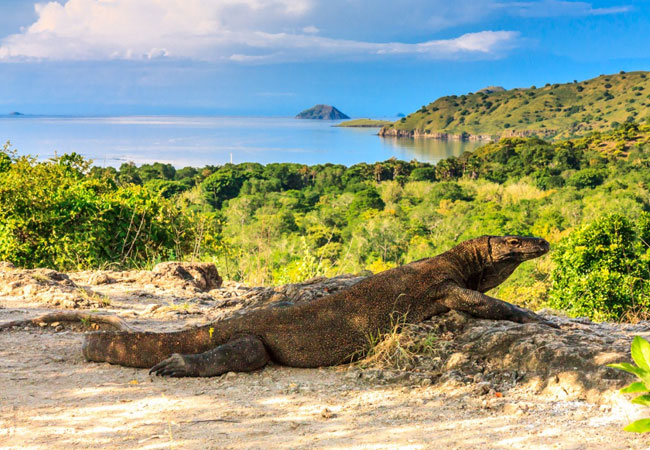 Komodo Island is located in the Nusa Tenggara Islands. This island is included in the Komodo National Park along the island of Rinca, Padar, Motang Island, and many other small islands.

Komodo Island is the habitat for native animals dragons, a giant carnivorous lizard. On the island, there are more than 2,000 Komodo dragons live in the wild. You can see the dragons chasing prey in many locations on the island. It's important for touring together with a guide/rangers for safety reasons for being here.

In 1986, UNESCO set Komodo Island and other islands in the Komodo National Park area as a world heritage site because of the existence of dragons that can only be found in this region. The habitat of the endangered animals is outdoors with meadow, white sandy beaches and tropical rain forests.

Komodo Island won the award for the New Seven Wonders of Nature which is a tribute to the seven best natural attractions in the world. Determining the winner is obtained from the results of voting and research experts, Komodo island won the highest vote along with six other tourist attractions are the Iguazu Waterfall, Amazon Rainforest, Puerto Princesa Underground River, Halong Bay, Jeju Island and Table Mountain.

Komodo is a giant reptile carnivorous lizard that can reach 2-3 meters and weigh 100-165 kg. This animal has a scientific name Varanus komodoensis, while local people call this beast as the 'Ora'. Komodo is creepy with a great body, sharp nails, scaly skin and has a forked tongue that always stuck out. The main prey Komodo dragons are pigs, horses, deer, raccoons, buffalo and monkeys.

Besides seeing the lives Komodo dragons in their natural habitat, there are many other things you can do on Komodo Island:

a. Trekking
Komodo Island is not only contained Komodo Dragons. Besides Komodo dragons, there are many other animals that inhabit this island such as horses, deer, various species of birds, snakes, lizards and more. One way to enjoy this island is to do trekking. You can see these animals when trekking in Komodo Island.

When you are trekking, you will be invited to climb Mount Ara has a height of 538 meters above sea level. You will also pass the Water Hole is a place to drink and rest of Komodo dragons. You can see the Komodo who is taking shelter under the tree or surroundings.

b. Diving or Snorkeling
Komodo Island is not only offer the natural beauty of the land. Under the sea on the island is also very beautiful. There are about 386 types of coral, 70 species of sponges, seaweeds as a home to thousands of species of fish, green turtles, whales, sharks, dolphins, and others.

Underwater world Komodo Island and Komodo National Park is known as one of the best dive locations in the world. When diving or snorkeling here, you can see the beauty of marine life that is very rich and diverse. There are three points of the best diving in Komodo by many divers that Batu Samsia, Toko Toko, and Crystal Rock.