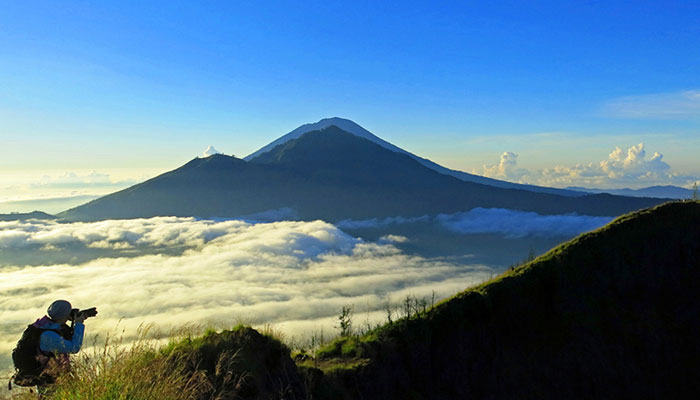 Mount Batur in Bali was finally recognized as the first World Geopark in Indonesia. The recognition of Batur Mountain as the world's first geopark in Indonesia was announced by UNESCO (United Nations Educational, Scientific and Cultural Organization) on its official website on September 22, 2012.

While the determination of Mount Batur as global geopark, has been implemented the day before by the Global Geoparks Network Bureau. The decision was the result of the 11th European Geoparks Conference meeting held in Arouca, Portugal, on September 19th to September 21st.

Together with Mount Batur, 3 other new sites are The Bakony-Balaton (Hungary), Geological and Mining Park in Catalonia (Spain), and a group of high mountains in Jiangxi Province (China). Together with that, the Geopark Global Network already has 91 sites located in 27 countries worldwide.

Geopark (also known as earth park) is an area or geological heritages site that has ecological values and cultural heritages and functions as a conservation, educational and sustainable development area. Geopark is set in a trial of the Global Geoparks Network (GGN), a UNESCO-formed body that runs every 2 years.

Mount Batur is an active volcano located in District Kintamani Bangli, Bali, Indonesia. The mountain with a height of 1717 meters above sea level has a very large and beautiful caldera. The Batur mountain caldera is formed by two major eruptions that occurred at 29,300 and 20,150 years ago. In the middle of the kalderanya there is Lake Batur crescent shaped. Lake Batur is about 7.5 km in length and maximum width of 2.5 km with a circumference of 22 km and covering about 16 km2.

Mount Batur is part of the 'Ring of Fire' Pacific and is one of the most active volcanoes in Indonesia. Recorded since 1804 mountains that are now designated as Global Geopark has erupted as many as 26 times.

The determination of the Batur mountain caldera as Global Geopark is inseparable from the unique geological landscape and its charming scenery. The uniqueness and beauty of geology, especially crater, caldera, and lake Batur, has become a mainstay attractions in Bali.

In addition, from the cultural side, the community around Batur mountain also presents a unique custom associated with the Hindu Bali. One of them is the funeral customs conducted in the village Terunyan, Kintamani. In this village the corpse is buried only by being laid on a boulder in three specific locations. Uniquely after days of not having embalmed and still undergoing the decomposition process, the corpse did not spread the stench.

The Global Geoparks Network Assembly 2012 in Portugal has become a milestone with Batur's appointment as the first Global Geoparks in Indonesia. In the trial, besides Gunung Batur Indonesia also proposed five other places, namely Lake Toba (North Sumatra), Merangin (Jambi), Mount Rinjani (NTB), Raja Ampat (Papua), and Kars Sewu (Central Java). Hopefully when the next GGN trial is held, Indonesia is able to add other geoparks to get UNESCO recognition.