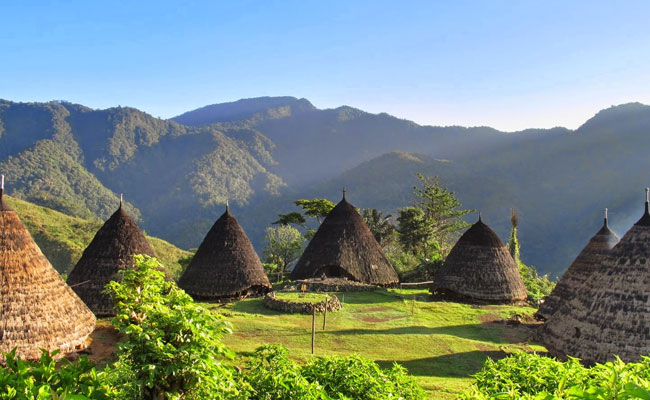 Did you know Wae Rebo Village? Or have you heard of this name? Wae Rebo is in our beloved Indonesia, precisely in Manggarai Regency, East Nusa Tenggara, on the island of Flores. Travel lover is challenged to visit an exotic village with a life that is completely different from your daily life. Away from the gadget, noisy medsos, and other worldly crowd.

Wae Rebo is able to cast you on the imagination of a fairy tale. Imagine, there is a small village that is uniquely tangible in the world and surrounded by timeless forest. Very challenging right?

Here are the unforgettable experiences you will get while exploring to Wae Rebo. Check it out guys!

1. You can only enter the village on foot. Four hours through the forest with a good guide or porter 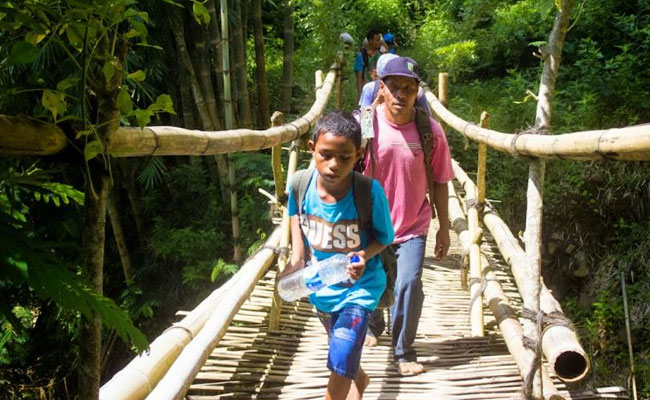 First, you must go to Ruteng, the capital of Manggarai. From Ruteng you can take public transportation or rent an ojek, go to Denge Village, West Satarmese which takes about 2 hours. In this village you should find a guide or porter to get into Wae Rebo. Start the walk from here and you will begin to take a path that tests the adrenaline: a cliff-topped dirt road and a cliff. However, the four hour journey will not be long and frightening because you will be entertained by the fresh air, green forest Lindung Tedo Lepok and interesting stories from your guide about Wae Rebo. During the trip you will pass three posts and can rest for a moment to recover energy.

2. Once seen from a distance, you will be amazed to say WOW! "This village is really like a fairy tale. 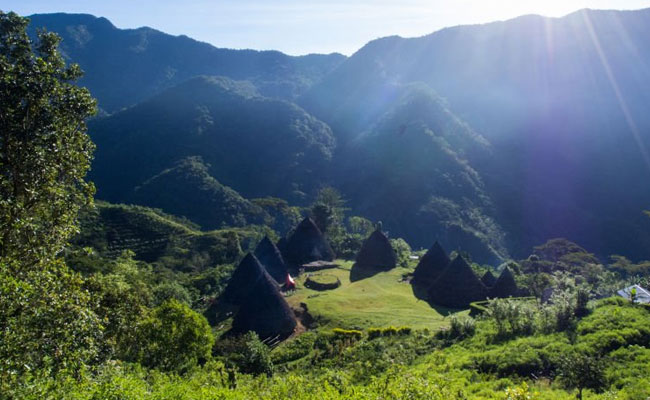 In post 3 you will start peering at Wae Rebo. Usually when you arrive by noon, you will find vaguely from a distance the range of cone houses covered by thin clouds surrounded by green mountains. Here, there will be an atmosphere when you are entering another world that you have never experienced. Panorama is like a fairy tale is an invitation to step immediately to Wae Rebo. You need half an hour to arrive at Wae Rebo.

3. First you must join the Wae Lu'u ceremony. You raised as the son of Wae Rebo 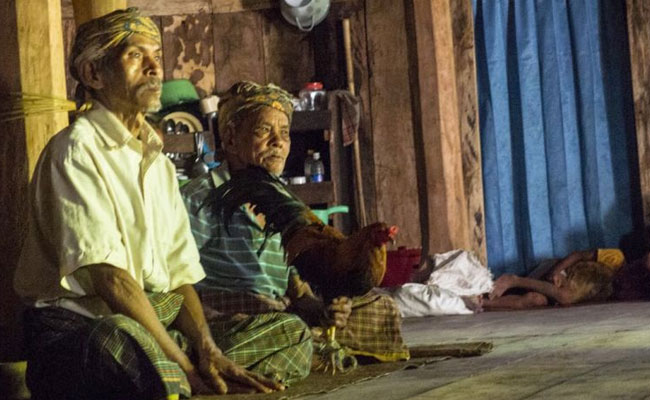 Usually you come to Wae Rebo will be with foreign tourists. You must be surprised, why this village can be visited by foreigners. In fact, Wae Rebo is well-known internationally rather than nationally. Initially foreign tourists more dominate the visit in Wae Rebo. Only after the architects visited the archipelago architects and in 2008, Wae Rebo became known in Indonesia. There is a remarkable achievement that Wae Rebo won, winning the Award of Excellence at the UNESCO Asia-Pacific Awards for Cultural Heritage Conservation in 2012. Wae Rebo is an example of conservation of a village that has been steadily keeping its tradition for hundreds of years.

4. From the beginning until now, only seven houses iconic cone surrounding the grassy expanse. 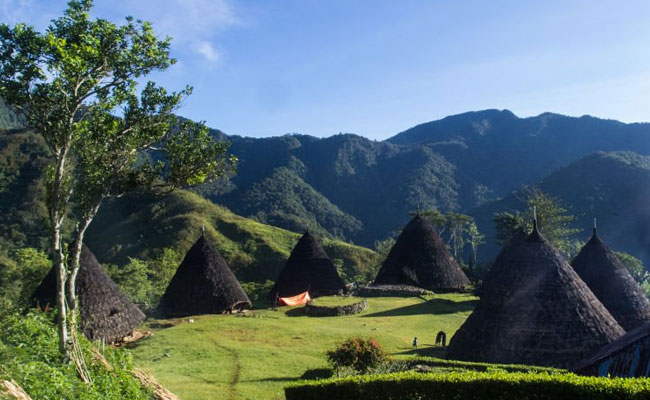 Currently the age of Wae Rebo village has 20 generations. Centuries ago the ancestors of Wae Rebo, the Empu Maro who came from Minangkabau, lived this village after wandering around. The house of cone was founded as many as seven whose number survive until now. This cone house is referred to as Mbaru Niang. From the seventh Mbaru Niang there is one of the most important and big, named Mbaru Tembong which is used for customary purposes. This cone house became a very iconic architecture in Indonesia and has gained international recognition. You should know that Mbaru Niang architecture is able to survive for centuries despite strong earthquakes many times ever shake the Earth Flores.

5. Wae Rebo has super-organic and super-delicious coffee. Everyday you can drink coffee until 6 times but your stomach will be fine. 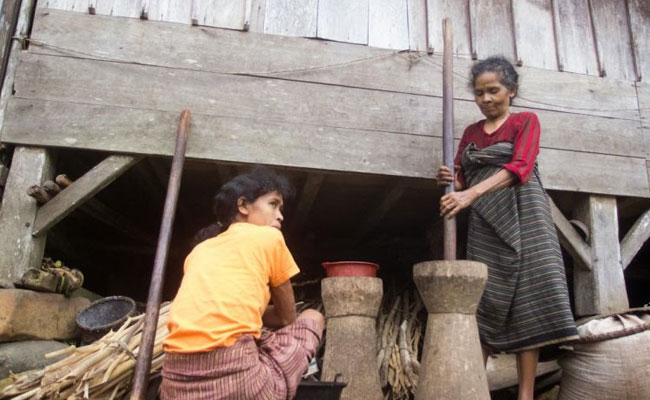 One thing you should not miss at Wae Rebo is try the coffee. Planted at altitudes above 1000 m above sea level, Wae Rebo coffee is regarded as the best. Moreover, this coffee is grown organically that really utilizes the wisdom of nature and culture. There are types of arabica coffee, robusta and columbia grown by the people of Wae Rebo. Try the super-delicious arabic coffee. At a citizen event, coffee is an important medium for getting closer relationships. Do not refuse coffee, even if you do not like coffee. Believe me, coffee Wae Rebo not make your stomach protests. I've drank 6 cups of coffee a day but the body remains mediocre. When traveling around the village, you will also often see residents picking or pounding their coffee.

6. The beautiful woven fabric makes you need to wrap it up as a souvenir. 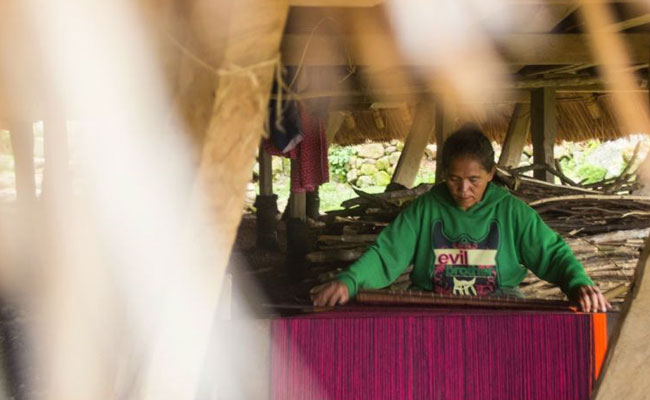 If you go around Mbaru Niang, you will find mothers weaving under Mbaru Niang. Greet them. Although they are carefully weaving, they will remain friendly and may invite you to try our weaving activities. Some of these woven products are used for personal clothing, others sold to tourists. Nothing wrong, you wrap this Wae Rebo woven fabric as a memorable souvenir. Motifs are usually interested tourists is a black woven fabric decorated with line motifs and images of blue, orange and green. Wrap and gift to the dear ones.